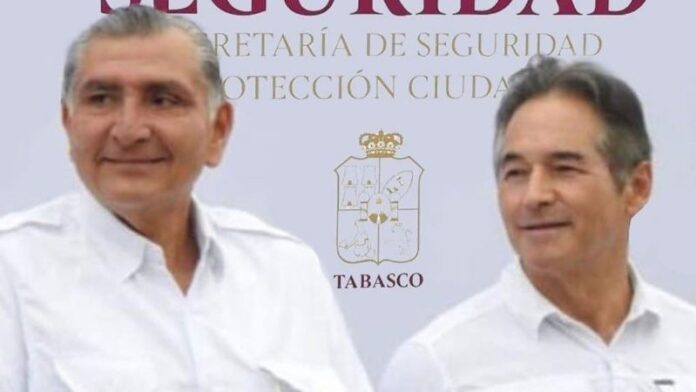 When he was governor of Tabasco, Adán Augusto López Hernández handed over the Secretary of Security and the State Police to three men who, according to documents hacked from Sedena, were identified as members of the Jalisco New Generation Cartel (CJNG).

When he was governor of Tabasco, the current Secretary of the Interior, Adán Augusto López Hernández, handed over the Secretariat of Security and Citizen Protection (SSPC) and the State Police to three men that the Regional Fusion Center of Intelligence (Cerfi) Southeast identified as members of the Jalisco Nueva Generación Cartel (CJNG). He even referred to one of them as the “supposed leader” of the group in Tabasco: Hernán Bermúdez Requeña, who remains at the head of the SSPC.

A report by Cerfi Sureste indicated that at least three huachicoleros leaders in the area spoke, in private conversations, of the alleged relations between the criminal Benjamín Mollinedo Montiel, “Pantera”, and “the governor” López Hernández. Mollinedo was, then, a “priority target” of the Secretary of National Defense (Sedena), according to Cerfi, since he headed the organization known as “La Barredora”.

In another report sent just last August 30, Cerfi pointed out that Bermúdez, as well as José del Carmen Castillo Ramírez and Leonardo Arturo Leyva Ávalo – who were respectively appointed Commissioner and General Director of the State Police of Tabasco by Adán Augusto López Hernández – , are part of “La Barredora”.

The five Cerfis scattered throughout the country bring together agents from Sedena, the Secretary of the Navy (Semar), the National Intelligence Center (CNI), the National Guard (GN), the Attorney General’s Office (FGR) and the Secretary Security and Citizen Protection (SSPC), which pool their resources to identify criminal groups in their region. The Cerfis send timely reports to the National Intelligence Fusion Center (Cenfi), which is responsible for much of the country’s security intelligence.

Hundreds of reports from Cerfi Sureste appear among the millions of documents of the Sedena Secretariat and hacked by the Guacamaya collective, giving rise to the SedenaLeaks investigation. Before publishing this report, Proceso and other media sought out Segob and Adán Augusto López Hernández –including two of the secretary’s personal numbers– to establish a direct communication channel and collect their version of the serious allegations made in the reports, but no response was received.

In an interview for this investigation, Bermúdez clarified that he was not notified about “any of this”; He asserted that the group “La Barrederoa” is “non-existent” (sic) and, after affirming that he cannot answer for the 7,000 police officers under his command, questioned the veracity of the documents hacked from Sedena.

“Here we are not aware that there is a cartel and more of that magnitude,” he endorsed, and elaborated: “How are we going to protect something that does not have proof of its existence?” The official stated that “if there is something against it, then at any time they can sit me on the defendant’s bench.”

In more than a dozen reports, Cerfi Sureste identified Hernán Bermúdez Requeña as “supposed leader of the CJNG in Tabasco”, known by the nickname “Comandante ‘H'”, and traced his multiple connections with criminal groups in the region. Adán Augusto López Hernández appointed him as head of the SSPC of Tabasco in December 2019.

Just a month before, the General Headquarters of the 30th Military Zone had sent an official letter to Cerfi Sureste stating that Bermúdez, then director of the Tabasco Investigative Police, had alleged links with Trinidad drug lord Alberto De La Cruz Miranda, “ El Pelón de Playas”, identified with Los Zetas.

In February 2021, Cerfi sent Cenfi a report indicating that Bermúdez called an intermediary from “Pantera”, and offered him his management to free his brother-in-law, “Pelón”, -detained by the National Guard on February 23, 2021. 2021– in exchange for 500 thousand pesos. On May 31, the same center reported that Bermúdez “possibly” informed “Pantera” about an imminent operation “by the State and the Secretary of the Navy” that had occurred three days earlier.

Another report entitled “CJNG in Tabasco” sent in July 2021, stated that the branch of the criminal group in the State was directed by a leader nicknamed “Gabo”, who had among his main operators Bermúdez and Leyva, but also Javier Reyes Palomeque. -general coordinator of Municipal Police- as well as “possibly José Felipe Padilla Castañeda, State Coordinator in Tabasco of the National Guard.”

When that report was issued, Adán Augusto López Hernández was still governor of Tabasco for Morena. His friend and countryman, President Andrés Manuel López Obrador, appointed him as head of Segob on August 30, 2021.

According to Cerfi, “Pantera” would be responsible for several murders in his struggle for control of the municipalities of Huimanguillo and Cárdenas, including the murders of two agents of the State Attorney General’s Office, in April 2021.

The reports were prepared between February 2021 and last August; the most recent of them indicates that Mollinedo was arrested, and that his brother, Felipe Mollinedo Montiel, “El Felipe”, took his place in the organization.

An intelligence report from May 2021 states that, in December 2020, two criminals dedicated to huachicoleo in Tabasco said, in a private conversation – presumably intervened by the authorities – that “the person responsible for the execution of Andrés Rodríguez Vasconcelos (a) “Kalimba”, was Benjamín Mollinedo Montiel (a) “Pantera” with the support of the officers by order of the Governor (perhaps they refer to Adán Augusto López Hernández, Governor of Tabasco)”.

The report cites another conversation from December 2020, in which the leader of a criminal card dedicated to fuel theft in Cárdenas said that “’Pantera’ … is with the government, is with the governor (perhaps Adán Augusto López Hernández, Governor of Tabasco) told me that the last time, in fact, the head of the state offered him a bonus in exchange for a pull, they are putting it on me and we are going to break his mother… (referring to Kalimba)”.

In both stories, the parts in parentheses that indicated that the criminals “perhaps” were referring to Adán Augusto López Hernández, were added by the agents of Cerfi Sureste, one of the five centers that exist in the country, where Sedena agents , the Semar, the CNI, the GN, the FGR, and scattered in five areas of the country. The Cerfi Southeast monitor criminal activity in regions.

In a very extensive presentation prepared in May 2021, Cerfi Sureste detailed the rise of Benjamín Mollinedo Montiel, “La Pantera”, a former assassin of Lucero Naranjo García, a member of “Los Zetas” who inherited the Tabasco plaza after the execution of her husband Sergio Meza Flores, “El Sorullo,” according to the report.

According to the report, Mollinedo’s group was made up of around 50 people and is dedicated to huachicoleo, extortion, the sale of material stolen from Pemex and the purchase of weapons, among others, all with the support of a group of assassins and through “the co-optation of authorities from the three levels of government.”

The report showed, based on intelligence actions, how the “Pantera” co-opted an alleged member of Semar, murdered rivals -especially its rival “Kalimba-“, made an agreement with “Personnel of the Civil Force of Agua Dulce” dedicated to drug trafficking. of people, negotiated with agents of the National Guard who wanted to “get ready to work”, bribed municipal police officers and even delivered Christmas groceries to residents.

The report also showed that “H” and his adviser Carlos Tomás Díaz Rodrígez, “El Lic”, worked hand in hand with “Pantera”; He pointed out that the official “authorized ‘Pantera’ to take control of Huimanguillo and part of Cárdenas, Tabasco.”

A scheme indicated that “Pantera” had the complicity of several authorities, including agents from the Attorney General’s Office (FGR), two traffic policemen, a soldier from the 57th Sedena Infantry Battalion, an element of the Semar and a Pemex security worker.

The report also indicated that a criminal nicknamed “El Nepo” told “Pantera” that “they should work with Oscar Ferrer Abalos (Candidate of Morena for mayor of Huimanguillo, Tab.) since he came to take them into account, he said that they could give them protection and fuel for their movement (campaign), and if they won the mayor’s office, they should provide them with 2 dump trucks and 1 backhoe, in addition to letting them work and giving them protection in Huimanguillo.” Finally “Nepo” and “Pantera” distanced themselves and launched into a battle to the death for Tabasco.