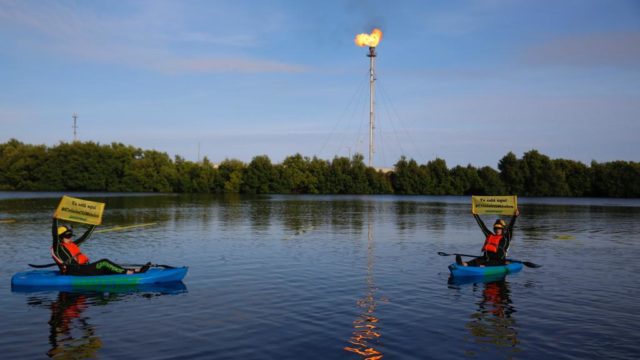 Pablo Ramírez, from Greenpeace, said that the government’s energy policy is not compatible with the goal of reducing emissions.

Between mangroves and a storage area of ​​Petróleos Mexicanos (Pemex) in Paraíso, in the state of Tabasco (southeast), Greenpeace held an amphibious protest this Sunday in which it demanded the Government of Mexico combat climate change and disengage from the fossil industry, on the eve of the COP26 summit.

In front of a gigantic lighter that burns the surplus gas coming from the southwestern marine region of the Gulf of Mexico, the members of the organization sailed and unfolded a long blanket of 25 meters in which they warned that the climate crisis had reached Mexico: “already is here #CrisisCliMéxico ”, Greenpeace.

For Pablo Ramírez, a specialist in energy and climate change at Greenpeace, the energy policy promoted by President Andrés Manuel López Obrador “is not compatible with the national and international goals in reducing greenhouse gas emissions”, which is why he urged greater environmental commitment.

“We are demanding that Mexico take its climate commitments seriously and establish effective measures to reduce greenhouse gas emissions, but, above all, measures to be able to adapt to climate change that is already affecting us and that affects millions of people in this country, “said the energy and climate specialist.

The campaign was carried out this Sunday morning between the coasts of the Gulf of Mexico and the vicinity of the Dos Bocas refinery, a flagship project of López Obrador that has received criticism from the international community.

Greenpeace demanded energy justice in Tabasco in the face of the effects of climate change.

“We see the state vulnerable and at the mercy of poor political decision-making. Economic development and respect for human rights can derive from a different, renewable energy model that is fair for people and for the environment, ”Aleira Lara, campaign director at Greenpeace, told EFE.

Greenpeace Mexico launched a call to the Mexican delegation that will participate in the climate summit (COP26) to present efficient, effective, and urgent proposals, but without falling into the simulation of environmental protection.

In addition, he demanded that López Obrador “rectify” his energy policy because he sees the Dos Bocas refinery as a distraction that eludes alternatives towards a transition to renewable sources.

“From Paraíso, Tabasco, we are launching a strong appeal because these people are highly vulnerable to the effects of climate change, where the fossil industry continues to strengthen and the problem continues to be reinforced instead of leaving it,” said the activist.

Lara regretted that the current Administration has abandoned in their public policies the fight for the defense of the environment and climate change: “This does not have a medium and long term. We need to act now! ”

“Greenpeace’s message in this campaign is that climate change is here. We need to act and COP26 is a summit where we expect world leaders to come up with efficient, effective, and urgent proposals. It can no longer be a simulation of environmental protection ”, Lara closed.

Known as climate summits, the COPs or Conferences of the Parties, whose twenty-sixth edition will be held in the Scottish city of Glasgow between October 31 and November 12, constitute the highest level political forum to face the crisis climatic.

Dos Bocas and Deer Park, far from being a fundamental solution to guarantee fuel in Mexico