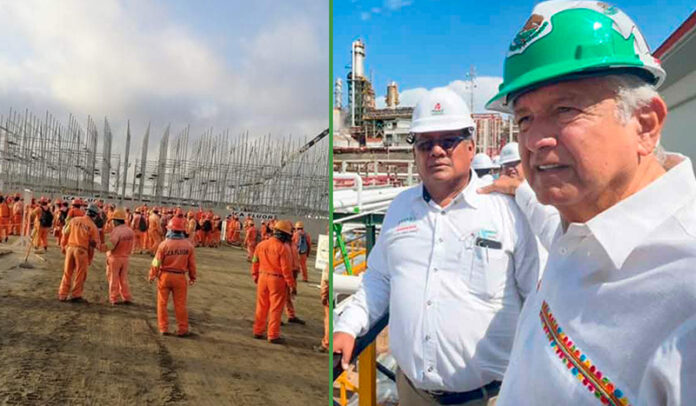 Over 5,000 ICA Flour workers participating in the construction of the Dos Bocas refinery are demanding better working conditions.

Around 7:30 in the morning, there were clashes between ICA Fluor workers at the Dos Bocas refinery and anti-riot elements of the state police.

Images of injured workers circulated on social media during the second day of their protest for non-payment and extortion of which they claim to be the object.

Workers from the ICA Flour company who are in charge of the construction of the Dos Bocas refinery in Paraíso, Tabasco, stopped work demanding better working conditions.

According to reports on social networks, there are 5,000 workers who demonstrate asking for a better salary, overtime pay, as well as greater security, protective equipment, and benefits.

So far, the Ministry of Energy (Sener) has not issued an official position on the situation at the Dos Bocas refinery.

Last February, ICA Flour workers had already made a strike due to the same situation.

Local media pointed out that elements of the Secretary of the Navy (Semar) arrived at the Dos Bocas facilities to take control of some plants and not affect productivity, as some workers closed accesses to the refinery.

While some others have begun to retire and refuse to return to work until their situation is resolved, local media said.

President Andrés Manuel López Obrador has promised to complete this work on July 22, the Sener points out that it is more than 50% complete.