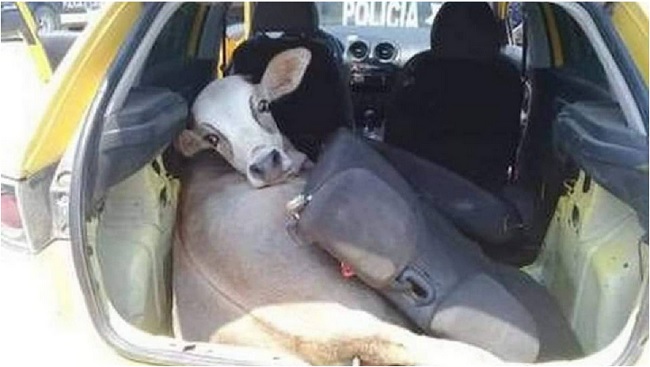 As incredible as it may sound, on Thursday, June 24th, a live cow was located in the trunk of a vehicle, that, apparently, had been stolen. The discovery would have occurred while an inspection was being carried out on possible transportation of weapons and drugs.

Through social networks, several users shared images of the cow that was in the trunk of a car, a fact that would have occurred in the municipality of Cárdenas, Tabasco.

As can be seen in published photographs, the animal (small to medium in size) was lying in the trunk of a car in which the rear seats were removed.

Apparently, the discovery of the cow in Tabasco occurred after the police stopped the vehicle to carry out a routine review, so when the animal was found, the pertinent documentation was requested; however, the occupants could not prove the property and were detained.

It is presumed that the three arrested were put at the disposal of the Office of the Attorney General of the State (FGE) of Tabasco so that an investigation folder can be opened for what happened. Authorities have not provided further details.

At the moment, the health status of the cow is still unknown.