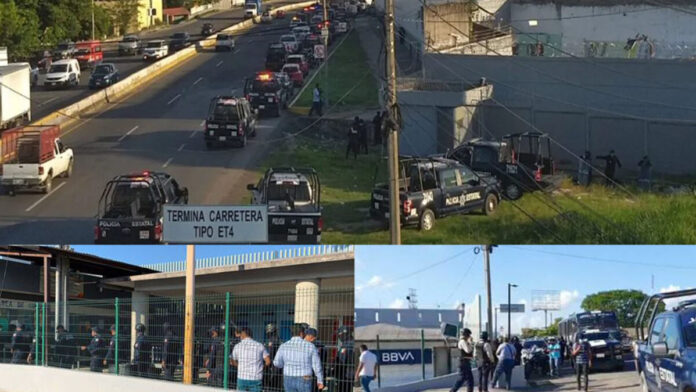 The violence in Mexico also breaks out in prisons. This Tuesday, a fight inside the Center for Social Reintegration of the State of Tabasco (Creset), in the southeast of the country, caused the death of six prisoners and left at least nine other injured. According to the authorities, the riot was started by a dispute between rival narco groups for control of this prison.

Drug gangs, including remnants of the old Zetas cartel, operate in Tabasco and their members often fight rivals in prison.

According to a report from the State Secretariat for Security and Citizen Protection (SSPC), the confrontation began around five in the afternoon in the prison yard, where several inmates used sharp weapons with improvised materials to take control of the facilities

The relatives of the prisoners have gone to the facilities of the penitentiary center, located on the outskirts of the city of Villahermosa, the state capital, to find out the list of those killed and injured in this fight. According to the Tabasco security authorities, the inmates were called up and the prison buildings were reviewed in order to locate and confiscate the weapons used.

Violence, fights and riots are common in prisons in Mexico. In 2020 alone, the National Human Rights Commission (CNDH) counted 926 clashes in state prisons and 183 episodes classified as “disorders.” In 2019 the balance had been somewhat lower. In total, last year there were 70 homicides in prisons and almost 50 cases of abuse.

Relatives of inmates gathered outside the Villahermosa prison, waiting to know the list of the victims of these attacks.

After the bloody riot, the prison authorities ordered the intervention of guards to prevent more violent acts and regain control of the place.

During the dispute, agents of the National Guard and anti-riot police of the SSPC of Tabasco, went to the place to dissuade and control the disturbance.