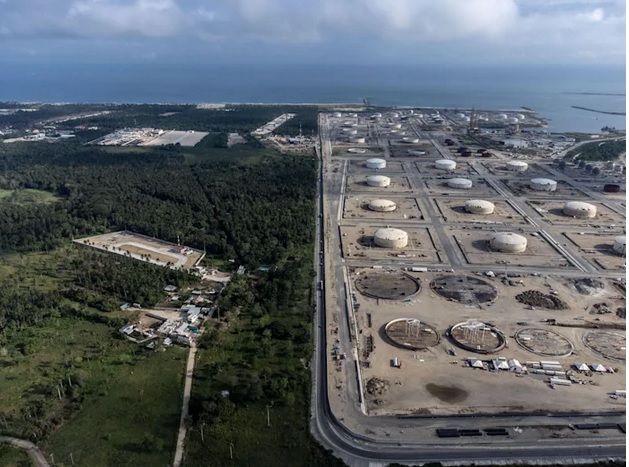 A Mexican opposition activist has filed a lawsuit seeking to stop the construction of President Andres Manuel Lopez Obrador’s $8.9 billion oil refinery, alleging that it is being built on land set aside for environmental protection.

The injunction request, filed in August, says that state oil giant Petroleos Mexicanos is illegally building the Dos Bocas refinery in the president’s home state of Tabasco on an area it promised to conserve and that it redacted public documents to hide the potential ecological damage.

The project “violates the right to a healthy environment and the principle that whoever contaminates pays, as established in the Mexican Constitution,” the lawsuit says. “It would seem Pemex forgot all the examples of the forest life found in 2007 and that it was obliged to conserve.”

Court papers provided by the legal team of the activist, Emilio Vazquez Rosario, show state authorities have requested numerous delays to get the required documents in order for the case. The latest delay is till January 10. Unlike in many countries, Mexico doesn’t make its court documents publicly available during a case. The government didn’t respond to a request for comment.

Pemex’s pledge to protect the land was made in public government files previously reported on by El Financiero.

Last month, Lopez Obrador filed a decree giving his major infrastructure projects national security protections that order authorities to issue provisional permits within five days of their application. It’s unclear whether the decree can be applied retroactively to earlier projects.

Lopez Obrador, known as AMLO, has staked a huge amount of political capital on Dos Bocas. He regularly touts it as a key project to reach gas self-sufficiency and most weeks shows videos of its progress at his morning press conference. The project has been criticized by environmentalists, who say the site hosted a protected mangrove forest, and by financial analysts over its large price tag. It’s expected to begin operating fully in 2023.

Filed in front of Tabasco’s eighth district judge, the lawsuit argues that Pemex made a legally binding commitment in 2006 and 2007 to protect the coastal area and any places including mangrove trees in the zone where the seaside refinery is being built. The Environment Ministry gave Pemex permission to develop oil and gas reservoirs nearby for 20 years — on the condition that it not build anything new in surrounding zones that contain rare flora and fauna, the files show.

The judge recently dismissed a request by Vazquez to halt the project on the grounds that the refinery has been harmful and could damage the surrounding area. He is yet to rule on the main part of the lawsuit, dealing with whether the project’s authorization was illegal.

In early September, the judge threatened to fine a government agency if it failed to quickly produce various documents for the court. However, no such fine appears to have been handed down.

Energy Secretary Rocio Nahle disputed that there were mangroves on the site in an interview with Bloomberg News in August even though the country’s environment regulator fined a third party in 2019 for chopping them down.

A member of opposition party Movimiento Ciudadano, Vazquez said he’s seeking the injunction in part because sea-level Tabasco is one of the Mexican states most at risk to the effects of climate change. Vazquez spent several years working for the conservative opposition PAN party before joining an unsuccessful attempt to set up an alternative party and ultimately becoming a member of Movimiento Ciudadano, the fourth-largest group in Mexico’s senate.

“It’s incredible the idea of having a Tabascan president with an archaic, arcane project that’s harmful for the environment and the health of Tabascans,” he said in an interview.

The refinery is at the heart of a push by AMLO to revive state energy companies, often at the expense of the environment. Scores of renewable energy projects have been stymied, while the state utility burns hyper-polluting high-sulfur fuel oil. A coal plant was reopened last year. Meanwhile, a $3.4 billion project aimed at reforesting vast areas of jungle has accidentally encouraged the widespread loss of forest coverage. Another of the president’s major infrastructure projects, a tourist railway in the country’s southeast, has courted controversy by threatening rainforest and the habitat of hundreds of endangered jaguars.

The Tabasco lawsuit cites satellite imagery that appears to show more mangroves have been cut down since construction began, allegedly to provide vehicle access to the site. The fact that mangroves continued to be chopped down shows the regulatory arm of the environment ministry, the Security, Energy and Environment Agency (ASEA), has failed to adequately inspect and supervise the refinery, the suit alleges.

ASEA has been run since 2019 by a former advisor of Lopez Obrador, who was rejected by the senate when nominated for several other regulatory jobs.

The injunction application also alleges that to stop people from knowing what damage could occur, the government redacted public versions of the environmental impact studies for the refinery, violating the public’s right to participate in its authorization process.

In the redacted documents, “it’s impossible to tell which three zones make up the project, which makes any scrutiny of its environmental effects impossible,” the suit alleges. “That information would have made it possible for the authorities to be confronted with the reality that there was a mangrove wetland on the site.”

The suit also alleges that Pemex claimed in its permit applications that the refinery would affect a much smaller area than in reality. Pemex’s data “don’t correspond to technical evidence of how gases spread, much less of the environmental impact they will have,” the suit alleges.