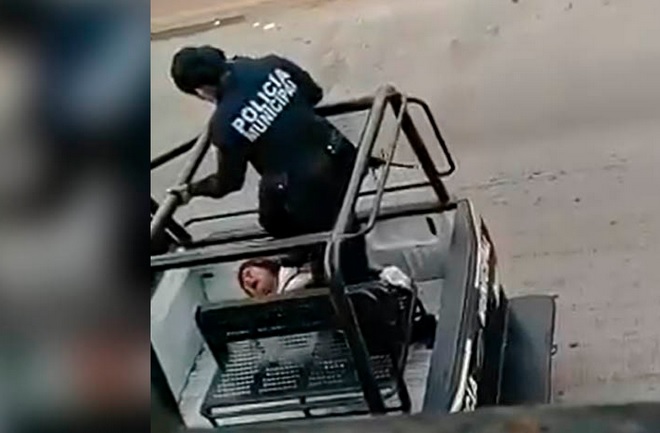 The director of Public Security of the municipality, Rubén Muñoz Rivera, assured that there is an ongoing investigation into these events.

Users of social networks released a video that caused deep indignation, in which municipal police officers from Cárdenas, Tabasco, are seen repeatedly assaulting a woman who was already subjected in a police vehicle.

At one point, one of the four agents involved in the arrest can be seen as he stomps the sole of his boot on the woman’s face, even though she is screaming stating that they are hurting her.

The director of Public Security of Cárdenas, Rubén Muñoz Rivera, assured at a press conference that there is an open investigation into these events: “They acted badly, I want to clarify this situation, and make the comment that the events are being investigated, the agents acted in a terrible way, these events hurt our society, the case has already been taken before the Honor and Justice Commission to investigate the facts ”.

Muñoz said that the two officers that participated in the attack face an administrative procedure that could lead to a suspension for 30 days or even their final discharge. If the Prosecutor’s Office requires them, they will be made available to them.

In this regard, the former federal deputy of the PRI, Liliana Madrigal, president of the feminist collective 50 + 1, condemned the abuse of power by the Cárdenas police and demanded that what she described as “torture” be investigated. Through her Twitter account, she assured that the footage “is scandalous.”

The police of Cárdenas, a municipality governed by Morena’s Armando Beltrán Tenorio, have numerous complaints about police violence. Between 2019 and 2021 “the corporation has accumulated 29 complaints against itsagents for abuse of authority, fraud, theft of money and cell phones, brutality, sexual abuse and harassment,” says the local media.