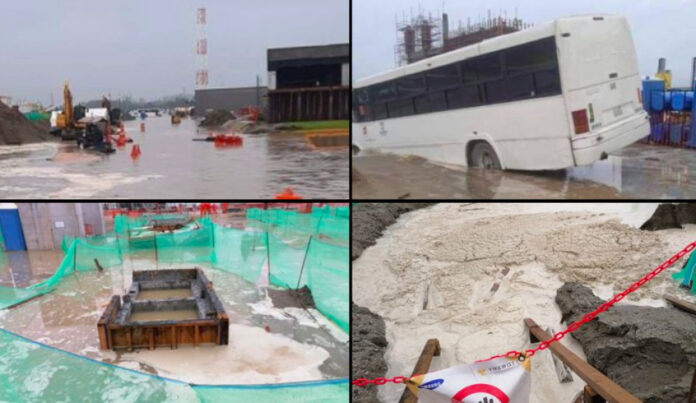 Dos Bocas refinery: unfeasible, opaque and with a negative impact on the environment

The Dos Bocas refinery registered floods after the rains in Paraíso, Tabasco, this week

The rains that have been registered in the entity in the last hours, generated by the presence of the cold front 21, caused flooding in different accesses of the Olmeca refinery in the municipality of Paraíso, complicating the construction work this Thursday.

The staff of the complex entered to work in heavy units since the water, in some areas, was up to their knees. According to images that circulated on social networks, some trucks and vehicles were trapped.

However, local media affirm that it is not reported that construction work has been paralyzed. However, they assure that some areas had to be closed for a few hours due to the water. So far, the authorities have not issued any statement in this regard.

On January 10, the Ministry of Energy reported that during the weekend 15 thousand tons of equipment were unloaded for the chemical plants of the work.

During the weekly video of the refinery work report, Secretary Rocío Nahle explained the arrival of a ship with 6 modules for the chemical plants, another ship with 41 pieces of equipment for the process area, and anticipated the arrival of 3 more ships with team.

The new Dos Bocas refinery, one of the main megaprojects of the Andrés Manuel López Obrador administration, may not be economically viable, since it is based on unreasonable financial projections, it has been opaque in the assignment of contracts, and its implementation did not take into account its negative environmental impacts or the fact that it was built on a property that has “high risks of marine and river flooding,” said the Superior Audit of the Federation (ASF).

However, in a series of seven audits published this Saturday, February 20, and related to the 2019 Public Account -the first of the López Obrador administration–, the ASF highlighted deficiencies in the design and planning of the work, as well as in the award of contracts, and expressed doubts about their economic, technical, legal and environmental viability.

He criticized, among other points, that the risks of flooding in the area have not been evaluated, nor the real availability of crude oil in the future.

As if that were not enough, it determined that at the end of 2019 the disbursements presented a delay of 35%, which “increases the risk that the refinery will not start operating as scheduled, which, consequently, could affect the profitability of the project investment,” he warned.

According to the supervisory body -in report 409-DS–, Sener’s financial projections contemplate a positive Internal Rate of Return for the megaproject, in part because it does not contemplate basic elements that will affect its operation.

Thus, he affirmed that the refinery will have a use of more than 90% when his own figures estimate its use at 78.5% –the other refineries operate at an average of 36.4% of their capacity–, and the figures do not take into account the collapse in Pemex crude oil production observed in the last decade.

Sener also “did not quantify the cost of supervising the works, nor the indirect costs caused by the operation of the project, including the repercussion that the Dos Bocas Refinery would have on the operation of the SNR, as well as the externalities due to the environmental and social impact that will be generated during the construction and operation of the refinery, so there is a risk that the expected income will decrease”, observed the ASF, recalling that Pemex estimated that the investment costs could cost between 30% less and a 50% more than expected.

In other words: as in the case of the Mayan Train, the ASF detected that the federal government provided happy figures to justify its megaprojects, which contemplate deep unknowns regarding their reality, which question the viability of the works;, not to mention that Pemex classified most of the information related to Dos Bocas as confidential.

In 2019, PTI-ID was led by Jorge Arganís Díaz Leal, now head of the Ministry of Communications and Transportation (SCT); At the head of the Pemex subsidiary, the official was responsible for “executing the project and making technical decisions for its development, which includes contracting and carrying out the necessary studies for the approval of the project.”

There, Arganís gave the green light to the Dos Bocas property, in Tabasco, despite the fact that the technical studies had not been completed, “which would have made it possible to identify, according to the environmental study, that the chosen property had high risks of marine flooding. and fluvial, which was one of the assumptions established to exclude the site, a situation that could generate investment cost overruns,” said the ASF.

The ASF observed irregularities in the assignment of 27 contracts to 23 companies, for a total amount of 20 thousand 490 million pesos; Of these, the supervisory body detected that Pemex did not carry out the “due diligence” process for 16 companies, and this despite the magnitude of the amounts contracted and the importance of the works.

In the 422-DS audit, the ASF determined that Pemex must clarify the destination of 75 million 591 thousand pesos derived from the multi-million dollar contracts that it awarded to several companies -among them the group headed by the company Huerta Madre–, most of them for payments “out of the norm”.

In addition, in the 409-DS report, the ASF pointed out the poor supervision of the works, since PTI-ID did not prove that it had contract execution programs, or logs on resources used, and was also unable to quantify the percentage progress of the works. works and works of the investment project.

In the XX audit, the ASF also observed “deficiencies in the elements of governance and internal control” of the work, which generate “the risk of postponing the entry into operation of the Dos Bocas refinery, and therefore the resolution of the public problem of the limited production of fuels to meet the national demand that gave rise to the project”.

Among others, he highlighted that the federal government launched the first phase of execution of the megaproject “without a complete planning process”, without indicators to measure progress in construction, and did not have 100% project design studies, ” therefore, there is a risk that the Dos Bocas Refinery does not have the necessary technical solidity”.

In addition, it pointed out that PTI-ID omitted to include the information on seven contracts in its financial statements, while “in 4 contracts not all suppliers were reported and in 2, the contractor indicated does not coincide in name or supplier number. ”, and in the accounts of Pemex no information is revealed about the contributions of 4 thousand 564 million pesos to the capital of PTI-ID.

Despite the obvious environmental impacts that the refinery will have on the region, the ASF determined, in several audits, that Sener and Pemex relegated the environmental issue far below their priorities in the Dos Bocas issue.

The ASF also determined that Sener pushed the megaproject without worrying about its environmental consequences and costs: construction began without having the environmental impact studies of the Ministry of Environment and Natural Resources (Semarnat) and an Environmental Impact Statement (MIA). ), in violation of environmental regulations; In addition, Sener granted the permit for refining without requesting documentation from Pemex regarding environmental protection.

And not only this: the MIA, according to the ASF -in report 213-DS– was prepared in just 30 days by the Mexican Petroleum Institute (IMP) -which should not have done it– and it does not have the minimum elements After a serious study, the project does not include the 285 million pesos of environmental mitigation, nor did it consider it useful to implement an Environmental Surveillance Committee.

The ASF determined that the MIA “did not comply with the three main pillars” regarding the Regional Environmental System (SAR) -which “was not adequately characterized–, nor with respect to” impacts and mitigation measures “.

In environmental matters, non-compliance is almost generalized, since Pemex ignored the “impacts” caused by the clearing of the 26 hectares of the construction site – which included a mangrove swamp -; and the Security, Energy and Environment Agency (ASEA) carried out an inspection that “presented procedural weaknesses since in its inspection it could not verify the state of the mangrove swamp.”

According to the ASF, the Dos Bocas MIA “did not have environmental studies and methodologies for sampling air, water, soil, flora, and fauna; it does not identify the degree of survival of flora and fauna species, including those categorized as at-risk; nor did it include the analysis of the health of the population located in the areas surrounding the project or the possible implications derived from the operation of the refinery.

Regarding the environmental impacts, they do not comply with the established structure since for their determination the works or activities that would cause them were not described, so they were described in a general way.

Due to the foregoing, it was observed that the fact of having prepared the MIA in 30 days, had a negative impact, which led to inaccuracy in its content, as well as weakness in the determination of environmental impacts, and non-compliance with the minimum requirements. for authorization, due to the lack of inclusion of mitigation measures.

Ironic fact: the MIA itself endorsed that the Dos Bocas area is subject to a “very high risk of flooding caused by storm surge.”

The ASF also determined that, although the refinery implies a reconfiguration in the Tabasco coastal region, in 2019 Pemex did not carry out any Social Management Plan to prevent and mitigate the negative impacts of the projects, nor did it approach the “local communities to expose the scope of the project, the positive and negative social impacts, and the benefits, for which the acceptance of its construction was not accredited.

Nor did Pemex evaluate “the contribution of the project to the development of the communities in the area”, which, according to the ASF -in report 411-DS–, “could affect good neighborly relations, and lead to the origination of possible unforeseen risks”. technical and social conflicts.

Sener, for its part, estimated that there were no indigenous populations in the area of ​​the refinery, so it did not carry out any prior, free and informed consultation, without accrediting that its decision was based on an “official methodology”.

Pemex also did not approach other agencies -such as the Secretariat of Agrarian, Territorial and Urban Development (Sedatu)– to address the issue of land use planning that the refinery will cause in the region, and mainly in the 1,608 hectares that make up the “Area nucleus” of the megaproject.