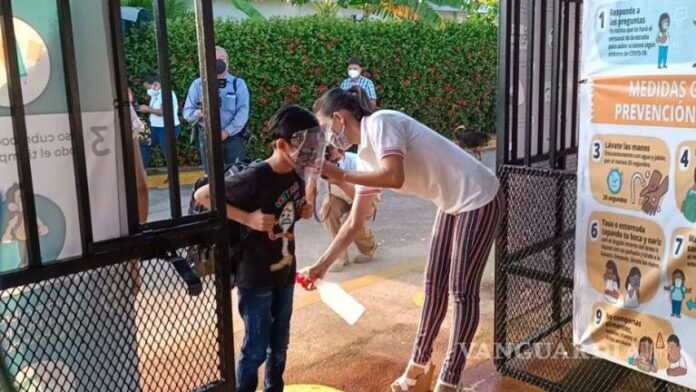 Egla Cornelio, head of the State Education Secretariat, assured that none of the reopened schools has been closed again since the decision was made to suspend classes only in the classrooms where the cases were registered

In the first week of face-to-face classes, the Tabasco Ministry of Education (Setab) reports 58 children infected with Covid-19, due to the implementation of PCR tests in three municipalities of the state in which they were returned to the classrooms.

In an interview, the head of the Setab, Egla Cornelio Landero, assured that none of the reopened schools has been closed again, as a result of the detection of children infected with the SARS-CoV-2 virus since the decision was made to suspend classes only in the rooms where the cases were registered.

He specified that the children who are confirmed to be infected even when they do not present symptoms but were asked to stay at home for ten days, and the other members of that group for five days.

The state official affirmed that the timely detection of infections among the students of the schools of Teapa, Tacotalpa, and Jalapa, are the results of the “Lolly” strategy, a campaign implemented by the health secretariats in this return to the classrooms.

He explained that the “Lolly” strategy is a PCR testing program that is applied to children in schools, through a swab in the shape of a small stick, a strategy with which Tabasco is the vanguard in the country for the evaluation of the scope. of the pandemic.

Egla Cornelio mentioned that, as a result of the tests applied on Monday on the first day of classes, the Ministry of Health reported to the Ministry of Education that 58 children tested positive with Covid, but, he remarked, all of them had contracted the disease outside from school.

“They notified us that 58 children showed up to school on Monday infected with the virus,” he said.

The secretary of education reported that in this return to the classrooms, more than 76,000 students attended face-to-face classes, of the 541,000 that make up the enrollment of the basic level. “On Friday, we had more than 76 thousand attendance, we had more than 15 percent of schools open, and we are progressing little by little,” he concluded.

The mystery behind the Olmec Colossal Heads of Tabasco

Mayan Train: this is how the tracks that will cross the Usumacinta are being placed