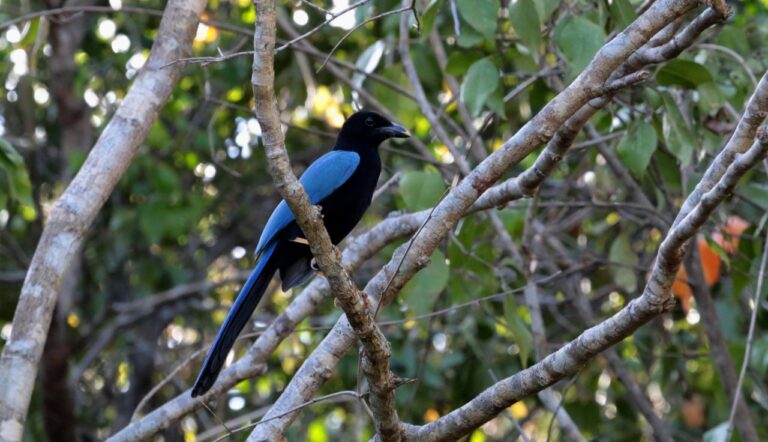 The Yucatecan chara is a distinctive bird of the Yucatan Peninsula and well known in Mayan communities such as chel, but although it is not within the range of endangered species, it currently faces challenges due to loss of habitat, mainly, such as most species of birds.

Juan Flores, coordinator of the Cancun Urban Birds program, as part of the North American Bird Conservation Initiative (NACBI) of the National Commission for the Knowledge and Use of Biodiversity (Conabio), explained that the Yucatecan chara is a quasi-endemic bird of the Yucatan peninsula, but it is also found in other areas such as Tabasco, Belize, and Guatemala.

This bird is distinguished by the peculiarity of having white plumage and yellow beak at birth, but as it grows, its plumage turns black and combines with the blue wings on its back.

However, the uniqueness of this bird does not end there, since when it is still more adult its yellow beak turns black.

In all its stages, a distinctive feature of the Yucatecan chara is the blue plumage on the feathers on its back, that look as if it was wearing a blue cape.

The Yucatecan chara can be seen in dense vegetation zones and in areas of the Yucatan Peninsula, sometimes it is also found in places with urbanity, like streets, and parks, although this second fact is very rare.

“In the area of ​​Felipe Carrillo Puerto towards Valladolid, especially the northeast part of the Peninsula, it has a greater presence, already going down towards Campeche it begins to decrease a little, that is, we can see this species, but not with such a distribution” Juan Flores commented.

The bird watching specialist also mentioned that tourists who arrive in the Riviera Maya have seen flocks of blue birds and marveling at the experience of seeing Yucatecan charas.

“It is a very striking bird and although it is very beautiful, not everyone in the city identifies it, as in the case of Mayan communities, where the inhabitants do know this bird because it visits the plantation areas a lot,” added Juan Vázquez.

In these areas, they know it as chel because it is totally white at birth, although with the passage of time, it takes on its black color as a hallmark of its maturity.

In addition, it is a bird that feeds on insects and fruits, and for that reason it seeks to take refuge in areas where this diet is available.

This species suffers the consequences of various effects on the environment, such as loss of habitat, pressure from economic activities and urban planning, climate change, soil contamination, felling of trees and fumigation of fields.

People from the United States, Canada and other countries where bird watching is a frequent activity sometimes travel to this part of the country to complete their collection of bird photos.

“Being endemic birds, it becomes a species that attracts bird watchers, who have to travel here just to be able to observe and photograph them,” he added.

In this sense, Juan Flores highlighted the effort that inhabitants of Maya communities have made to protect the distinctive species of the region.

Being an endemic bird, the Yucatecan chara is present throughout the year in this area of ​​the country, so anyone at some unexpected moment is fortunate to see it.

On the list of the International Union for the Conservation of Nature (IUCN) it is in the category of “least concern”, that is, it is not yet at risk of disappearing, so Juan Vázquez makes a call to protect them.