In contrast, there will be frosts in high areas of northern and central Mexico, fog banks along the Sierra Madre Oriental, as well as north wind in the Isthmus and Gulf of Tehuantepec.

This day, tropical wave No. 44 over the Yucatan Peninsula, will maintain the probability of very strong punctual rains in Quintana Roo . A low pressure channel will extend over the east and southeast of the country and will interact with the entry of moisture from the Gulf of Mexico, generating heavy to very heavy rains in these regions.

Also, cold and icy temperatures are forecast at dawn in high areas of northern and central Mexico, fog banks along the Sierra Madre Oriental, as well as a north component wind in the Isthmus and Gulf of Tehuantepec , with high waves in said gulf. 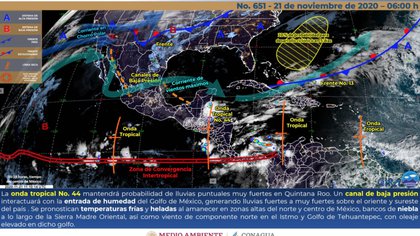 The rains could be accompanied by electric shocks, hail and strong gusts of wind during storms . In addition to an increase in the levels of rivers and streams, landslides and floods in low areas of the land.

Valley of Mexico: Partly cloudy to cloudy sky with probability of isolated rains in the State of Mexico and in Mexico City . Cold environment during the morning, in mountainous areas that surround the Valley of Mexico. North and northeast wind from 10 to 25 km / h with gusts of 40 km / h. In Mexico City, a maximum temperature of 19 to 21 ° C and a minimum of 8 to 10 ° C is forecast. For the capital of the State of Mexico, maximum temperature of 18 to 20 ° C and minimum of 3 to 5 ° C. 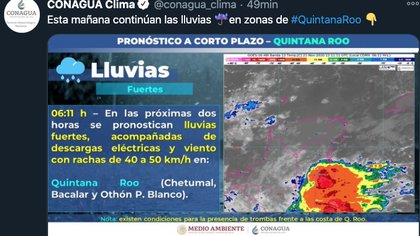 Baja California Peninsula: Partly cloudy sky during the day and no rain in the region. Cool atmosphere in the morning and hot in the afternoon. Northwest wind from 15 to 30 km / h with gusts of 40 to 50 km / h in Baja California Sur and the Gulf of California.

North Pacific: Partly cloudy skies and no rain in the region. Cool atmosphere in the morning and very hot in the afternoon. West component wind from 15 to 30 km / h.

Central Pacific: Scattered clouds during the day with isolated rains in Michoacán. Hot environment during the day and variable direction wind from 15 to 30 km / h. 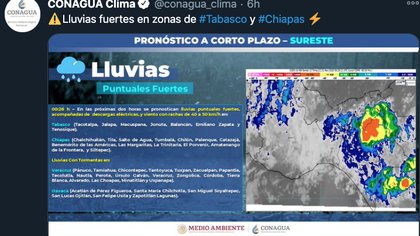 Gulf of Mexico: Cloudy sky with heavy occasional rains in Veracruz and Tabasco, as well as showers in Tamaulipas. The cold atmosphere at dawn with fog banks over the mountains of the region. Wind from the east and northeast with gusts of 40 to 50 km / h on the central and southern coast of Veracruz and in Tabasco.